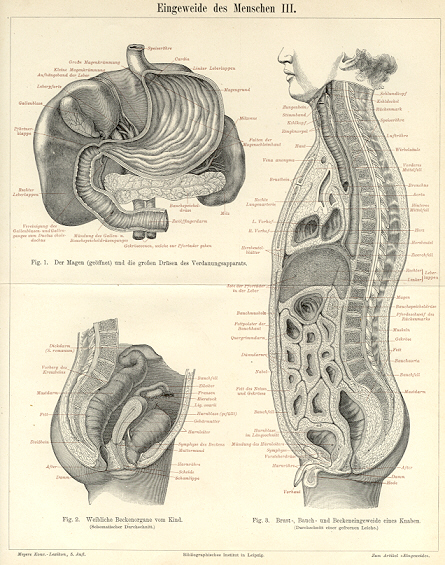 There’s the old saying: you are what you eat. Part of this guilt-inducing suggestion is that you should pay attention to what you ingest, eat more healthily, because your food will become part of you. But hidden within this message is something much more basic, ancient, and largely unacknowledged, namely that all life is made of the same building blocks, that we are all evolutionarily related. The reason you can eat vegetables and derive nourishment from them is because somewhere millions and millions of years ago both you and broccoli share a common ancestor. All living things on earth today in fact share a common ancestor, one that made use of the same biological building blocks—the amino acids, sugars, nucleotides, and fatty acids—that we still use today. It’s this commonality of life that allows us to eat other lives and perpetuate our own.

Here, I’ll examine our digestive system, considering how its characteristics allow us to efficiently process and make use of the food we eat. This provides a vivid illustration as to how organisms are adapted to their environment. It also raises the issue as to how well we humans could exist on ‘food’ found (evolved) in an alien environment.

Why do we eat?

In our digestive system, we break the proteins, starches (carbohydrates), and fats we ingest down to their simple building blocks. Proteins are broken down to amino acids, carbohydrates to simple sugars such as glucose, and fats to fatty acids. These simple biomolecules are then taken up into our cells where they can be used as (1) precursors for building our own molecules or (2) sources of energy. The role as precursors is fairly obvious, although strangely circular in concept; for example, we consume and break down the proteins from other organisms to their constituent amino acids, and then use these amino acids to make our own proteins. Ah, the circle of life! How we use biomolecules as sources of energy is more complex, but can be simplified to the central concept of us extracting electrons from the biomolecules. Electrons, as anyone who has plugged a computer or a toaster into an electrical outlet can attest, can be used to do work.

How do we break down complex biomolecules to their simple building blocks?

The answer to Bilbo’s riddle is teeth, correctly guessed by Gollum even though he had only six. Why do we chew our food? To make the food smaller and thereby expose more of it to our digestive enzymes. Perhaps obvious, but chewing is an important aid to our digestive process, whether you subsist on orcs or okra.

How do we digest starches?

Starches are large polymers of the sugar glucose. The chief enzyme responsible for starch digestion is alpha-amylase, which cleaves the bonds between the glucose molecules. Digestion of starches begins in the mouth. In grade school, you may have had a teacher give you a saltine cracker and have you chew and hold it in your mouth without swallowing for a minute or so. Surprisingly, the saltine should start tasting sweet. This is because the alpha-amylase cleaves and releases sweet-tasting glucose from the starch in the cracker. The rest of starch digestion occurs in the intestine, which contains alpha-amylases of its own. Alternatively, if you wanted to emulate the common housefly or Brundlefly, you could spew your saliva onto your food, let the enzymes do their work, and then suck the sweet results up.

Why can’t we eat wood?

Like starch, the cellulose that makes up the cell walls of plants, and forms a major component of wood, is a polymer of glucose. But no matter how much you gnaw and chew on your oaken bedstead, or how many balled up sheets of paper you ingest, you won’t be able to break them down to their glucose building blocks. This is because the linkage between the glucose molecules is slightly different from that found in starch—it is essentially a mirror image—and so is not recognized by alpha-amylase. Digesting cellulose requires a different enzyme: cellulase. If you check the list of ingredients on the pills you can take to aid digestion, you’ll often find cellulase listed as one of the components. This helps break down the cell walls of yeast, fruit, and vegetables from which you normally derive no nutrition. It also suggests a way you could bioengineer a human to better survive in the wild.

This brings us to the digestion of fats and oils, both fats from animals and oils from plants being similar in structure but having different melting temperatures. As with starches, your saliva contains enzymes to help break down fats. These lipases, however, don’t become active until they reach the acidic pH of the stomach, which is where digestion of the fats truly begins. The problem with fats and oils is that they don’t dissolve readily in water. They clump and stick together like oil in water, to borrow an age-old phrase. Bile provides the solution to this problem. Bile is produced in the liver, stored in the gall bladder, and released into the small intestine when you eat. The bile salts act like detergents to break up the fats, exposing them to the lipases in the intestine that then enzymatically cleave them down to fatty acids.

Why is the stomach acidic?

The polymers of amino acids that make up proteins are tightly folded into three-dimensional structures, so that each protein is in essence a microscopic Gordian knot. The sword applied to this Gordian knot is acid. Under low pH, the polymers of proteins no longer hold their form and unravel, a process called denaturation, allowing digestive enzymes called proteases access to the chemical bonds between the amino acids. Some proteases are adapted to the low pH of the stomach, others to the conditions found in the intestine. Cooking food also helps in the denaturation of proteins, assisting in the digestive process. Richard Wrangham, in his book ‘Catching Fire: How Cooking Made Us Human,’ proposes that cooking was essential to our evolution, as well as social structure, as it allowed us to extract more calories from a limited amount of food.

To serve and protect: the wonders of mucus

You produce about a liter of mucus per day! The amount you hack up from your throat or blow from your nose is, in fact, but a minor expulsion from this magnificent whole. So what is all that mucus good for? Mucus is made of the protein mucin, but the protein portion of mucin is but a tiny seed from which sprout hundreds of sugar polymers. These long sugar chains allow mucins to bind lots of water, resulting in the gel-like consistency of mucus, and, significantly, make the mucins resistant to degradation by proteases. Mucus coats many interior surfaces of your body, including the digestive system where it acts as a lubricant. Mucus also acts as a protectant. Mucus protects the stomach walls from the acidic pH, so that the proteins in the walls don’t become denatured. Mucus also protects your digestive system from its digestive enzymes, so you don’t digest yourself. Without mucus, the proteases you produce could readily chew holes through the linings of your stomach and intestine.

As you have undoubtedly guessed, and in spite of the many positive readings made on their tricorders by the Enterprise crew, I don’t hold out much hope for humans deriving nutrition from alien flora and fauna. This doesn’t mean I think it impossible for alien life to incorporate some of the same types of biomolecules found on earth. Amino acids and sugars are produced fairly readily by inorganic means. The famous Urey-Miller experiment of 1952, in which methane, ammonia, hydrogen, and water were treated under prebiotic-like conditions, was initially found to produce 11 amino acids, with more recent and sensitive analyses extending the number to 25. But even granting that alien life might incorporate amino acids and sugars, these would probably be different than the ones predominantly used by Terran life. In particular, there is no reason to suspect that the same complement of twenty amino acids needed for our proteins would be present; the odds against this are literally astronomical. Furthermore, even if you were to seed an early world with the same complement of biomolecules we use, the polymers produced from these need not be those common to earth and, as such, would not be recognized for processing by our digestive enzymes. The situation would be much like that of Olestra, the novel fat substitute synthesized from sucrose and fatty acids, which passes through our system undigested, has no caloric content, and may, in the words of a warning label that could be applied to many alien foods, “cause abdominal cramping and loose stools.”

2 thoughts on “Spec Tech: Of Mucus, Bile, and the Indigestibility of Wood (or What We Talk About When We Talk About the Digestive System)”